Andy Reid: A Big Year for the Big Guy 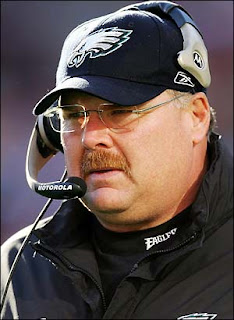 Have the Eagle’s peaked during the Andy Reid era?

Coming off a second non-winning season in three years, one must wonder if it is time for a change. Rumors already have McNabb leaving town after 2008. Could the coach who drafted McNabb suffer the same fate?
Reid’s nine-year tenure has been filled with success and moments of greatness. He is responsible for leading the Eagles to four NFC championship game appearances (2001-2004) and to Super Bowl XXXIX in 2004.
Recent interviews with Reid show a coach who is oblivious to the team’s recent struggles. Since the 2004 season the Eagles are a .500 team (24-24). In that span they have won one division title (on the strength of a back-up quarterback) and the accompanying playoff berth.
The Eagles have also finished last in the division twice. That 3 year record places the Eagles 14th in the NFL over that 3-year span, well behind both the Cowboys and Giants, and with the same record as Washington.
The Eagles claim to be the gold standard, a similar mantra voiced by the New England Patriots. The Patriots challenge for the Super Bowl year in and year out. Reid rationalizes the team’s recent struggles as “coming up short a couple of times.” Coming up short is losing the Super Bowl on a last minute drive, not missing the playoffs altogether!
The Eagles roster is filled with star veterans. Unfortunately these veterans are also aging stars. Instead of drafting the missing complimentary pieces, Reid’s recent draft day decisions have lacked urgency.
The Eagles have gone two years without using a first round draft pick. Reid continues to stock pile draft picks, always planning for the following season.
And most frustrating is Reid’s inability or stubbornness to change his coaching style. How many times will Andy continue to go to the pass on short yardage downs? How many times will Andy’s poor clock management cost the Eagles’ valuable time and points?
While his initial coaching strategy proved effective, recent results make one wonder if the league has begun to figure Reid out.
2008 is a big year for the Eagles, the quarterback and the head coach. Each needs a return to the status of the elite. If not, 2009 will be a big year for the Eagle’s new quarterback and new coach.
Posted by chris klinkner at Wednesday, June 18, 2008