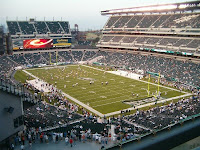 As the season approaches, so do the number of NFL predictions.

A lot of the so-called experts are picking another mediocre season for the Eagles. A common predicted record for the Eagles in 2008 is 8-8 and out of the playoffs.
In a review of the schedule it is difficult to see how the Eagles do not win at least 9 games, maybe even 10.
But who really knows...no one knew the Giants would win it all last year.
Looks like a Win: Rams, Bears, Redskins (once), 49ers, Falcons, Giants (once), Bengals, Ravens, Cardinals, Cowboys (once)
Looks like an Loss: Cowboys (once), Steelers, Seahawks, Giants (once), Browns, Redskins (once)
Only 72 days until we begin to find out...
Posted by chris klinkner at Friday, June 27, 2008