Battling In the Trenches: Sizing Up the Big Guys 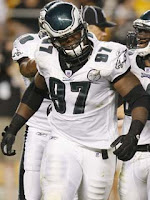 Being a former offensive lineman in high school and college, Andy Reid has always put an emphasis on building strong offensive and defensive lines.

How do the lines look going into the 2008 season..

Defensive Line: The Eagles will look to improve on last years' 37 sacks (ninth best in the NFL)

Trent Cole is coming off of his first Pro Bowl season and should continue to be a pass rushing force off of the edge.
Offensive Line: In 2006 the line gave up 29 sacks. In 2007 the number ballooned to 49 sacks. Improvement is a must in 2008 as the Giants and Cowboys can and will bring the pressure.