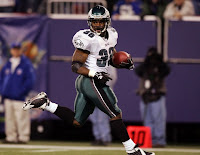 It is noted that Brian Westbrook is the "NFL's most dangerous all-around back." In the past, such a comment has been reserved for LT in San Diego.

After years of battling for recognition, Westbrook is finally getting the much deserved spotlight.

Will the 2008 season be the season when the Eagles' offense becomes a run first team? Maybe bring back the three headed running attack of years back?