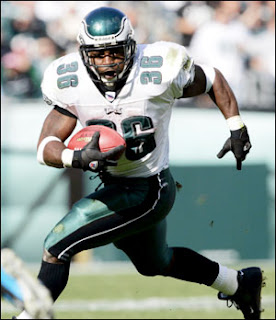 As an Eagles fan, were you really surprised? It was only a matter of time, right?

In case you missed the latest Eagles news, Westbrook has gone public again with his unhappiness over his current contract. Can you blame the guy?

Westbrook is scheduled to make $3 million in 2008. This would make him the 13th highest paid running back in the NFL. Ahead of Westbrook are such mediocre running backs as DeShaun Foster, Thomas Jones, and Ahman Green.

In case you don’t remember, Westbrook led the NFL in yards from scrimmage in 2007. He scored 12 touchdowns and totaled over a 2000 yards, earning Pro Bowl honors.

Memo to Joe Banner: Westbrook is your best player! He's the only reason your team was able to eek out an 8-8 record last year.

Adding humor to the situation is that Westbrook’s comments come following a night out with Eagles owner, Jeffrey Lurie. Westbrook, McNabb, and Dawkins attended last nights NBA finals game in Boston as guests of Lurie.

Can’t the Eagles, for once, enter a season without controversy. 2008 could be the Eagle’s last opportunity to capture a championship before rebuilding. McNabb could be playing elsewhere next year and Dawkins could be done.

The Eagles have shown time and time again that they are unwilling to renegotiate a player’s contract. The Eagles just don’t do it. But realizing Westbrook’s value to the team, an exception should be made.

Westbrook is a one of a kind talent. He is the lone offensive weapon that strikes fear into opponents. Westbrook makes his teammates better. Just imagine how even less effective the Eagles receivers would be without Westbrook on the field…a scary thought!

Speaking of receivers, Westbrook was not only the team’s leading rusher, he also lead the team in receptions (90). If nothing else, give him some of Reggie Brown’s salary!