Correll Buckhalter to the Chicago Bears? 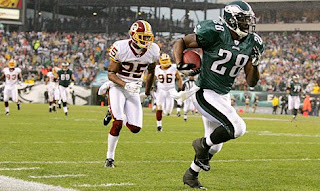 When final cuts roll around the Eagles are going to have to make a difficult decision at running back.

The off season addition of Lorenzo Booker makes Booker the logical choice to be the number two running back behind Westbrook. The Eagles would look foolish to already give up on last year's third round pick Tony Hunt. And Hunt provides size for short yardage situations.

With this scenario is Buckhalter expendable? And if so, would would make a good trading partner for the Eagles?

How about trading Buckhalter to the Chicago Bears for draft picks. After cutting Benson, the depth chart at RB for the bears is Adrian Peterson and rookie Matt Forte. Last year the Bears ranked 30th in rushing yards per game. Going into the season Peterson is their #1 back with 510 yards last year.

Buckhalter would make sense for the Bears and would allow the Eagles to capitalize on a position of strength.
Posted by chris klinkner at Thursday, June 19, 2008