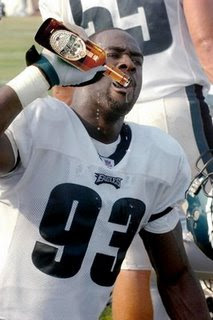 Former Philadelphia Eagle and current Tennessee Titan, Jevon Kearse was arrested on Sunday morning for a DUI.
Kearse took a field sobriety test, but refused a breathalyzer. He was arrested and charged with DUI and violation of Tennessee's implied consent law for failing to take the breathalyzer test.
It appears that Kearse hit the bottle harder than he hit opposing quarterbacks lately.
Hey, maybe the front office does know what they are doing. Next we will find out that Reggie Brown is a #1 receiver!