Hi, My Name is Lorenzo Booker 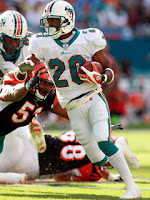 (Lorenzo Booker in Action)
And I am the big off-season free agent signing for the Eagles offense. I am it. There will be no big name wide receiver coming to the Eagles. Only me, some Lawton guy, and Kris Wilson.

My resume is as follows:

Job Responsibilities:
- Improve the Eagles woeful scoring offense. In 2007 the Eagles ranked 17th in the NFL in scoring.
- Give Brian Westbrook some much-needed rest. Westbrook played in 15 games during the 2007 season. During those games Westbrook had 84 percent of the carries by Eagles running backs.
- Provide a boost to the Eagles anemic kick return game.

Resume:
- Unfortunately my only NFL experience was last year with the 1-15 Miami Dolphins. Despite Ronnie Brown’s injury, I managed only one start.
- My stats…some good, some bad. In 2007, I carried a 4.5 yards per carry average, but gained only 125 yards rushing. I also added 237 yards receiving, but had no rushing or receiving touchdowns.
- I played my college ball at Florida State. My numbers were so good that the Eagles had plans on drafting me in the 2007 draft. They were too late and had to settle for Tony Hunt.

Reviews / Future:
- Blazing speed, great hands, and elusive. I have been compared to a guy named Brian Westbrook.
- The plan is to use me in a lot of 2 man backfields with Westbrook. Maybe bring back some memories of the Charlie Garner and Ricky Watters backfield.
- On third downs I will be spread out as a receiver for mismatches against a linebacker.
- I will be your number 2 running back. Maybe the Bears would be interested in Bulkhalter?

My Promise to Eagle Fans:
- I can guarantee that the 2008 Eagles will have more wins than my previous employer.
Posted by chris klinkner at Wednesday, June 25, 2008