Improvement is a MUST For These Eagles 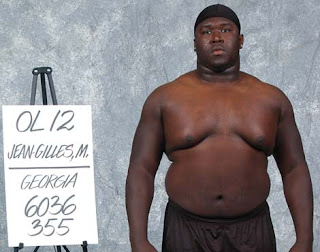 Max Jean-Gilles
Yes it is strange to list a backup offensive guard as an important cog on any team, but Jean-Gilles is at a crossroads in his career already.

When Jean-Gilles was drafted he was a renowned masher, an inline run blocker that dominated at Georgia. It seemed inevitable to pair him with Shawn Andrews to create an imposing guard tandem for years.

The problem is Jean-Gilles has issues with pass protection and has not progressed enough to usurp the position from last year’s starter, Todd Herremans.

Jean-Gilles’ struggles has caused a major shake-up on the offensive line. The Eagles now have Winston Justice working at guard in practice, a position he has never played before.

Has Jean-Gilles digressed so much that he is now considered a worse prospect than the man who single handily put Osi Umenyiora in the Pro Bowl last year?

Jean-Gilles needs to begin to fulfill his promise soon. Otherwise he becomes yet another failed prospect at the offensive line position.

Sean Considine
Often overlooked in discussions of the Eagles secondary is how weak their safeties could potentially be.

Considine has improved considerably since joining the Eagles but there is still little doubt that he is the weakest link in the secondary.

Having Samuel, Brown and Sheppard at corner is useless if there is not competent coverage help over the top. Considine’s struggles prompted the drafting of Quintin Demps and led to speculation about possibly moving Sheldon Brown to the safety position. Moving Brown then diminishes the strength at corner. Let’s hope the speculation remains only speculation.

There is already a logjam at the safety position with Dawkins, Mikell, Reed, Demps, and Paschal. Considine will have to improve and play well behind the Eagles’ corners to help solidify the back end. If not, he can forget about ever regaining his starting spot from Mikell. Or worse, keeping his roster spot.

Reggie Brown
What can Brown do for you? It’s an important question this season for the Eagles as last year the answer was very little.

The curious thing about last season’s struggles was that Brown was coming off of a strong 2006 campaign where he caught eight touchdown passes. If Reggie reverts back to his 2006 form, the Eagles receivers could approach decency.

Kevin Curtis comes into the season looking to improve on his 1100 receiving yards and 6 touchdowns in 2007. DeSean Jackson brings much needed speed to spread the field. LJ Smith brings a weapon in the middle of the field. The missing element is consistency from Brown.

Brown must improve for the Eagles offense to fire on all cylinders again in 2008.
Posted by chris villante at Tuesday, June 24, 2008

Or just because he needs all the work he can get?