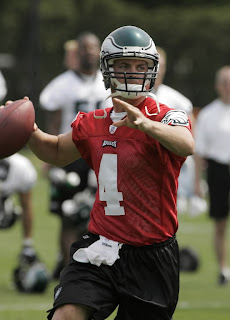 It is not hard to find stories of 2008 being McNabb’s last year as the Eagles' starting quarterback. Following this season, the future at quarterback could be Kevin Kolb. 2008 will be another opportunity for Kolb to learn the system, prepare for life as a starter, and then take the reins.

But what if history continues to repeat itself and McNabb suffers yet another injury. McNabb has missed 15 starts over the past three seasons.

Can Kolb lead the team in 2008? Are the team, the fans, and the city ready for the Kolb era to begin so soon?

The early signs point to Kolb being the Eagles No. 2 quarterback in 2008. The number of repetitions between Kolb and A.J. Feeley favors Kolb at the offseason camps. Recent comments from Andy Reid also point to Kolb being the No. 2. “I’ve seen improvement in Kolb, and right now he has a seasoned veteran ahead of him and behind him.”

Unfortunately, Kolb was unable to gain any on-the-field experience in 2007. His only appearance was in mop-up duty against the Detroit Lions. His line was zero passes attempted, two sacks, and one fumble. Not much of a confidence builder.

When McNabb went down with an injury last year, Feeley was inserted into the starting role. After initial flashes of brilliance, the real Feeley emerged and proceeded to throw eight interceptions over a three-game span. It is not hard to figure out why Kolb has been promoted to the No. 2 position!

Kolb’s statistics at the University of Houston were off the charts. In his senior year, he completed nearly 67 percent of his passes, threw 30 touchdowns, and only four interceptions. Despite his success, scouts wondered if those gaudy numbers were the result of inferior competition and Houston’s run-and-gun offense?

Would Kolb be prepared to lead the team in 2008 if called upon? Is his college experience and 2007 sideline learning enough? The early signs point towards the answer being yes.

Coaches and teammates have repeatedly commented on his growth and maturation during the past year. Kolb appears confident and poised when leading the first-team offense during practices. He is able to recognize and read the defenses quicker and is hitting the open receivers in stride.

Kolb is also making the necessary mental adjustments to succeed at the NFL level. Each repetition is another opportunity for learning, to hone his skills, and gain the confidence and trust of his teammates.

"I'm pretty ready to practice every day," Kolb said. "I look forward to practice and proving myself, so I try to take it as seriously as I can so the learning curve isn't so steep when I get out there. The preseason, I'll take that very seriously as well and try to treat it as a regular-season game. Hopefully that will prepare me for when I am out there."

And just what if McNabb does go down with another injury, and Kolb proceeds to step in and is successful? Could the Kolb era begin for good in 2008? Such events could make for a very interesting year in Philadelphia.
Posted by chris klinkner at Wednesday, June 18, 2008