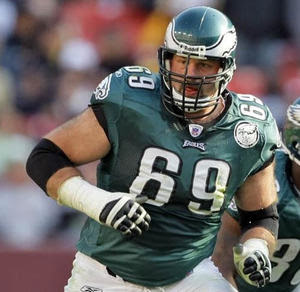 QB Kevin Kolb made one appearance for the Philadelphia Eagles in 2007. His stats were two sacks and one fumble. If the Eagles don’t plan right, Kolb lying on his back could become a recurring event.

While the possible change at quarterback next year may grab the headlines, it is another possible change that could have the greatest effect on the future of the Eagles.

2008 could signal the end of the Tra (or is it William) Thomas and John Runyan era. Each of the players will become unrestricted free agents following the 2008 season.

The two tackles have started 118 games together. And both have been durable and dominant.

Thomas has made multiple Pro Bowl appearances, while Runyan is considered one of the leagues toughest linemen (176 consecutive regular season games started).

It would be hard to argue that the success of McNabb and Westbrook is in large part due to the tackles blocking for them.

With the value that the Eagles place on a players’ age (you are 30…goodbye!), the end could be near. Thomas will be 34 and Runyan will be 35. A luxury and strength for the team will soon become one of the team’s glaring weaknesses.

Who will lead the protection as the Eagles usher in the Kolb era?

Based on recent drafts, the Eagles still appear to be searching for the answer.

Everyone praised the Eagles for “stealing” Winston Justice in last year’s second round of the draft. The selection didn’t look too smart following Justice’s 2007 performance (see Umenyiora sacking McNabb six times). Justice’s problems have continued into the offseason as players (current and former) continue to question his desire and toughness.

Another possible solution would be to shake-up the current line configuration and move either perennial Pro Bowler Shawn Andrews or Todd Herremans from guard to tackle.

Moving Andrews would then weaken the guard position, but moving Herremans would allow Jean-Gilles to move into Herremans' vacated guard position. But can the Eagles afford to have Herremans struggle at tackle like he struggled at guard last year?

The Eagles could always hope that there is a stud in this year’s draft class.

Maybe Mike McGlynn or King Dunlap will be the answer. But if these players were so special why did they last until the 4th and 7th rounds respectively. Dunlap had difficulty beating out a freshman on last year’s Auburn team!

Whatever the answer is, the Eagles need to be sure that the tackle pieces are in place for 2009. The future of Kolb and the future of the Eagles' pass happy offense depends on it.
Posted by chris klinkner at Wednesday, June 18, 2008