LaJuan Ramsey Picked Up by the San Fransico 49ers 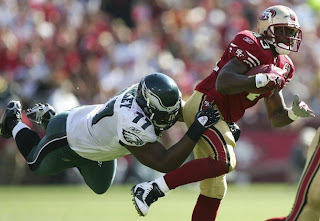 I guess one team's garbage is another teams starting defensive tackle.

The San Francisco 49ers announced that they have claimed defensive tackle LaJuan Ramsey off waivers. Ramsey was cut by the Eagles following the conclusion of last week's mini-camp.

Ramsey was once considered a late round draft steal steal by the Eagles. Unfortunately the more the team saw of Ramsey they figured out why he was still available in the 6th round.

He was active for only nine games last season, sitting for the final four. Here's hoping that Trevor Laws lives up the hype and provides better relief for Bunkley and Patterson.
Posted by chris klinkner at Wednesday, June 18, 2008