Lito Sheppard in the House: Why Philadelphia Eagles Should Keep This Cornerback 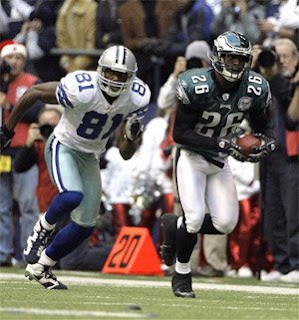 Where is the problem? Why the attitude?

The NFL is a pass-happy league. The Eagles’ top division rivals, the Cowboys and the Giants, boast up-and-coming star quarterbacks and top-notch receivers.

The Eagles finished the 2007 season near the bottom of the league in generating turnovers. Outside of Trent Cole, the Eagles had difficulty generating pressure on the quarterback.

Keeping Lito in a secondary with Brown and Samuel negates the strengths of the Cowboys, the Giants, and the entire NFC. Keeping Lito gives the Eagles two of the league’s top interception producers. Keeping Lito leads to more “coverage” sacks.

Lito complains that he is being underpaid. When looking around the league and recent cornerback contracts, this may prove true. However, the stats show Lito Sheppard having difficulty staying on the field due to various injuries (13 games missed over the past three seasons).

With Lito’s injury history and games missed, his current contract doesn’t seem all that unfair. If Lito wants a new contract then he should earn it this year…stay on the field and produce! A big 2008 increases Lito’s trade value and the likelihood that a new team would give him the big money contract he seeks.

Keeping Lito also gives the Eagles options that weren’t present in the past. The numbers show teams use a three-cornerback package nearly 60 percent of the time. The Eagles' nickel package would now boast three “starters.” The much-improved Hanson would become the team’s fourth cornerback.

With Dawkins coming back from an injury-plagued season, keeping Lito gives the Eagles the option of moving Brown to safety if his injuries continue. Using Brown keeps Considine off the field!

All offseason, players and fans have voiced their desire for the team to acquire more playmakers. If Lito stays, the need is lessened. Lito already is a playmaker on defense (Lito was the first player in NFL history to have two interception returns of more than 100 yards).

If recent rumors are true, Lito could be bringing a dynamic, elusive element to the team’s weak receiving core. If DeSean Jackson, a rookie, can’t handle the return duties, Lito can take over punt return duties. Using Lito keeps Mahae off the team!

It’s a need-need, win-win situation. The Eagles need Lito to overturn their recent slide into mediocrity and to make one last push with their aging veteran core. Lito needs the Eagles to prove he is worthy of an “Asante contract.”
Posted by chris klinkner at Wednesday, June 18, 2008