The Minnesota Vikings To Win the Super Bowl? 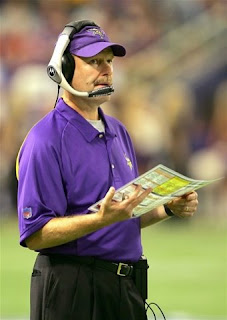 SI's Dr. Z has labeled the Minnesota Vikings as the favorite to win this year's Super Bowl.

Did the Philadelphia Eagles hold onto the wrong coach by keeping Reid and letting go of Childress?

Though I don't believe that the Eagles will be hosting the Lombardi Trophy this year, there is no way the Vikings are claiming the title. Last time I checked Tarvaris Jackson is still the starting quarterback and Childress is a Reid coaching disciple.

So even if the Vikings manage to get to the Super Bowl (which they won't), we can count on a Reid-like coaching startegy to lead the opposing team to victory.
Posted by chris klinkner at Friday, June 20, 2008

there is nooooooooooooo way the vikings will make the super bowl. They would be happy to make the playoffs!