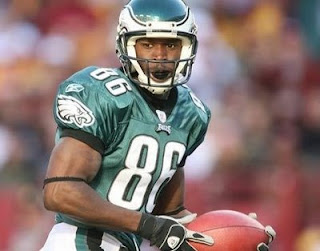 Today’s news of Terry Glenn’s absence from Cowboy’s mini-camp got this Eagles fan thinking. I can’t believe I am going to write this—Is it possible that the Eagles have the best set of wide receivers in the NFC East?

Yes, the much maligned Eagles receivers are tops in the division. Need some convincing?

In 2007 the Eagles top-three wide receivers (in terms of statistics) were Kevin Curtis, Reggie Brown, and Jason Avant. Together the trio posted 161 receptions, 2157 receiving yards, and 12 touchdowns.

In 2007 the Cowboys top-three wide receivers were Terrell Owens, Patrick Crayton, and Sam Hurd. Together the trio posted 150 receptions, 2366 receiving yards, and 23 touchdowns.

In 2007 the Giants top-three wide receivers were Plaxico Burress, Amani Toomer, and Sinorice Moss. Together the trio posted 150 receptions, 2010 receiving yards, and 15 touchdowns.

The numbers show the Eagles leading in receptions and second in receiving yards and third in touchdown receptions. Better than you probably thought, but the argument needs to be stronger.

When looking at the 2007 numbers you must take into account that both the Giant and Cowboy receivers had their starting quarterback (Manning and Romo) starting all 16 regular season games.

Donovan McNabb started only 14 games and missed time in another game. The Eagles receivers had A.J. Feeley (this year’s third string quarterback) throwing them passes for two-plus games.

It is not hard to argue that the Eagles receivers would have posted better numbers with McNabb starting all 16 games. Also, McNabb entered the season at less than 100 percent health. Again, don’t you think McNabb’s health lessened the effectiveness and numbers of the Eagles receivers?

The Cowboys, Giants, and Redskins each had a dominant tight end on the field to draw coverage away from the receivers. Cooley, Whiten, and Shockey (for 14 games) had to be accounted for on the field. Bringing a double-team to the receivers becomes more difficult.

The Eagles had an injured and ineffective LJ Smith in 2007. A healthy Smith draws similar defensive coverage, freeing up the receivers on the outside. Less coverage again would have lead to better numbers by the wide receivers in 2007.

Entering the 2008 season, which set of receivers looks most promising? Again, the answer is the Eagles receivers.

The Cowboys will enter the season with Owens and Crayton again being their top two receivers. It seems that Glenn will not be returning to the Cowboys as he is refusing the team’s $500,000 contract guarantee. There is no argument on Owens being a top receiver, a future Hall of Famer, the division’s most dominant receiver.

The effectiveness of Clayton diminished as the 2007 season progressed. By season’s end Crayton was known more for running his mouth than his play on the field.

The Giants will most likely enter the season with Burress and Toomer being their top receivers. Steve Smith, coming off of a strong Super Bowl performance, could challenge for the number two position.

Moss, Randle El, and rookies Devin Thomas and Malcolm will battle for the top receiving spots.
Can Moss make it through a season with out injury? Can Randle El and the rookies master the complexities of Zorn’s West Coast offense? Can an inconsistent Campbell get the ball to them enough to be effective?

Too many questions surround the Redskins receiving core. And we can’t forget the Redskins still have James Thrash on their team. That fact alone speaks volumes about the quality of the Redskins wide receiver position.

The Eagles enter the season with two established veteran receivers leading the way. Curtis will be entering his second year in the system. In college and with the Rams, Curtis showed significant statistical increases from year one to year two.

Brown will be entering his fourth year in the Eagles system. His numbers have increased from each of the previous years. During an inconsistent 2007 season he was still able to post a career high of 61 receptions.

Desean Jackson will also have an impact on the success of Brown and Curtis. Jackson brings speed to the WR position and will stretch the field. The deep ball will again be a weapon in the Eagles offense. Brown and Curtis will be able to roam the middle more freely and increase their yards after catch numbers.

But if for some reason a Chad Johnson or Mike Williams becomes available…well you can ignore my babble.
Posted by chris klinkner at Wednesday, June 18, 2008

Eagles WR?
No, they are not the best in the division, but the Eagles' QB is the best.