Philadelphia Eagles: A Fan's Guide to the Offseason 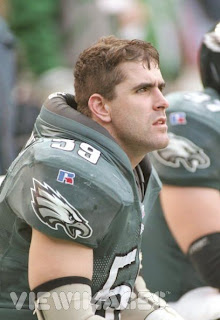 So you are a diehard Eagles fan. You bleed Eagle green. You drink the green Kool-Aid.

If these characteristics describe you, the next month is going to be maddening. Training camp can’t get here fast enough.

From mid-June through the end of July, Eagles news will be very, VERY quiet. What is an Eagles fan to do?

Here are some helpful suggestions to help pass these upcoming weeks:

•Start deciding which player’s jersey you will be wearing this year. For those fans still rocking a Mamula or Watters jersey, it is time to let go. And no, a Jason Avant jersey is not an old T.O. jersey with Avant written in black marker on masking tape!

•Help in the search to find Lito Sheppard and Scout Young. It’s okay if you aren’t able to locate Young.

•Monitor the headlines from the Cardinals', Bengals', and Lions' mini-camps. It is okay to still hold out hope for a Boldin, Johnson, or Williams trade. The Eagles can’t be serious about entering the season with their current corps of receivers, can they?

•Catch a Phillies game. They are putting up numbers that the Eagles' offense would be envious of (20 runs against St. Louis on Friday).

•Call your local US Senator to discuss the top news stories affecting our nation: the war in Iraq, the struggling economy, and of course, Spygate.

•Scour the New York headlines and thank your stars you are not entering the 2008 season as a Giants fan; tight ends are yelling at general managers, receivers are threatening to holdout, and gap-toothed linemen are retiring.

•Search the World Wide Web for more Sheppard trade rumors. There has to be some team that Sheppard and two No. 1 picks haven’t been offered to yet.

•You could actually read a Dave Spadaro article. Or not.

•Read your 100th 2008 NFC East prediction column. What does it take to be labeled an NFL expert? You or I could write these articles...and pick our Eagles first every time!

•Research the Kimo von Oelhoffen signing. And no, it is not a misprint...two total tackles in 2007. Andy knows best.

•Research the Luke Lawton signing. And no, it is not a misprint...he was a running back with the Colts who gained a whopping 42 total yards in 11 games. In Reid we trust.

•Research the Dan Klecko signing. And no, it is not a misprint...the fullback signee is playing defensive tackle. I think Reid is clueless.

•When you are sitting in your office cubicle, start randomly singing the Eagles' fight song. Did I really need to type the word randomly?

•Start planning out this year's tailgating menu. Maybe a turducken for the Thanksgiving game?

•Check out a Chris Klinkner article on Bleacher Report. I hear he writes amazing articles on the Philadelphia Eagles.

•Search out what our buddy Fred-Ex has been up to. A few weeks back he was in the Ravens' mini-camp for a tryout. In comparison, maybe the Eagles' receivers aren’t that bad!

•Begin mentally preparing yourself for another McNabb injury. It is going to happen.

•Begin mentally preparing yourself for another season without a championship. Sadly, it is going to happen.

As you read this article, there are only 27 days until training camp, and 82 days until the season starts. Yep, another Eagles fan with too much free time on their hands.
Posted by chris klinkner at Wednesday, June 18, 2008

in the dictionary, the meaning of the word "masochist" should be "eagles fan". i write this as an act of mercy toward my fellow masochists. while you should enjoy watching football, YOU SHOULD NOT GET EXCITED ABOUT THE EAGLES POST SEASON POSSIBILITIES!
the eagles had 2 major shortcomings going into the offseason and neither were adequately addressed (a team looking to win now should not count on rookies). the eagles needed a wide receiver the opposition respects and an interior defensive lineman that can disrupt an opposing offense. isaac bruce and shaun rodgers were available and would have been decent bets. the eagles, instead, signed a cornerback. while there is nothing wrong with having 3 good corners, why strengthen a strength when they could have strengthened weaknesses?
there is 1 more reason to NOT get excited about midnight green in the playoffs and that was made obvious in the dallas game monday night - #5 is talented and capable of helping the team be competitive, but no serious threat to be a super bowl winning qb. a botched handoff, inaccurate passes and no scrambling when no one is open merely showed (once more) that the eagles qb is good, but not elite.
like i already advised - DO NOT GET EXCITED!