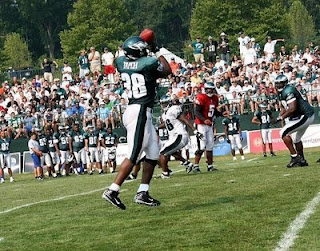 Who would of thought he would be so hard to replace? Was he one of a kind? Can his skills not be duplicated? How are the Eagles going to survive?

Who am I referencing? Am I still yearning for the departed TO? Maybe I am pleading for one more year of the Freak?

Looking back at the Eagles off-season moves you would know I am talking about Thomas Tapeh. Hey, I could of said Richie Kotite!

Friday brought yet another fullback signing, Luke Lawton. You know the stud from Indianapolis who tore up the league for a combined 42 yards in 11 games! Funny thing is that he was actually a running back (not that 43 yards is respectable for a fullback, but it could serve as a decent excuse).

The search for a fullback began with the signing of Dan Klecko. Think you may have heard of Dan Klecko before, but the guy you are thinking off played defense. It can’t be the same guy, right? Wrong! Here again are the Eagles trying to outsmart the rest of the league. Klecko’s career offensive states stats, 4 receptions for 20 yards in 5 years.

The next stop in the search was to sign Kris Wilson. Think you may heard of a Wilson from Kansas City, but that Wilson played tight end. It can’t be the same guy, right? Wrong again! Will Wilson be the fullback for the Eagles? Probably not, as Wilson is better suited as a TE. Its not as if the Eagles already have 4 TEs on the roster…wait, they do!

If the eagles let Tapeh sign with the Minnesota Vikings they must have had a capable replacement already on the roster. Wrong yet again! The back up plan was Jason Davis.

Davis’s career stats, well there aren’t any. Davis went undrafted out of Illinois in 2006. His rookie year was spent on Injured Reserve. His second year was spent on the Eagles practice squad. 0 total yards or 43 yards less than Luke Lawton.

Who could of thought that replacing Tapeh would prove so difficult? I guess replacing 18 yards rushing and 50 yards receiving is more difficult than the casual fan thinks.

But in Andy Reid we trust. I mean when a similar situation presented itself last off-season with the kick / punt returner position Andy nailed it! Remember the Green Bay game…
Posted by chris klinkner at Wednesday, June 18, 2008