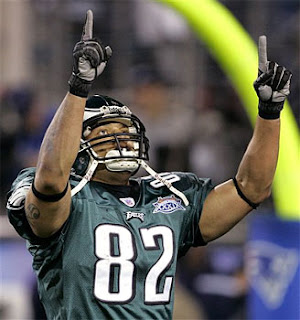 Offseason camps have ended, and we now anxiously await the arrival of training camp. With a lull in Eagles news, let’s take a look back at the Eagles offseason moves.

If we were throwing out grades, the marks would be pretty high, maybe a B, maybe an A. Despite the high mark, there is reason for worry as a fan in Eagle land.

In reviewing the off-season moves, it is easy to see the focus of the Eagles' moves: improving the defensive side of the ball. Though the Eagles defense completed the 2007 season with a top-10 ranking in total yards against, there were areas of weaknesses. Creating turnovers stands out as the most obvious flaw.

Insert Asante Samuel, Chris Clemons, and slew of other lesser-name free agent and rookie signings. At least on paper the defense looks much improved, possibly dominant.

What worries a fan is the lack of moves made on the offensive side of the ball.

Yes, the Eagles did draft speedy wideout Desean Jackson and sign young and upcoming players like Lorenzo Booker and Kris Wilson. These additions carry a lot of potential.

Unfortunately, potential might not bring immediate results in a “win-now” 2008 season.

Throughout the offseason you would read of players (McNabb and Westbrook) speaking about the team’s need to acquire playmakers to strengthen the offense. The Eagles think that the healthy return of LJ smith can fill that playmaking void.

Can LJ be the answer to last year’s red zone deficiencies? The Eagles believe so, and believe so highly of LJ that they slapped him with the team’s franchise tag. Other teams usually use the tag for Pro Bowl-caliber players. It would be hard to argue that LJ is even of the league’s top ten tight ends!

LJ brings career highs of five touchdowns (2004, 2006) and 61 receptions (2005) to the table. These are not numbers that opposing team’s defensive coordinators lose sleep over.

Does Smith force opposing teams to focus on him, bring a double team? He does not. Does his presence on the field make the Eagles mediocre receivers better? This is doubtful.

The Eagles lack of urgent moves on offense show that they think differently. They believe that LJ Smith is a playmaker, will change the opposing team’s defensive schemes, and will make his teammates better.

Lets hope that Big Red gets this one right. Otherwise it will be another season of stalled drives and David Akers field goals.
Posted by chris klinkner at Wednesday, June 18, 2008