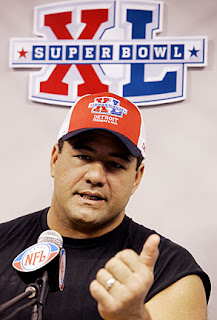 Finally! As an Eagles fan, this is the headline you have been waiting for all offseason! The final piece to the championship puzzle is now in place.
Eagles fans no longer need to worry about Donovan’s shoulder injury or the whereabouts of Lito Sheppard.
The Eagles announced today the signing of defensive tackle Kimo von Oelhoffen to a one-year deal. That’s right; Oelhoffen is again a Philadelphia Eagle!
There are conflicting reports on the number of teams that were battling for his services.
The extended time and effort put into re-signing Oelhoffen finally provides insight into why the Eagles were unable to land a top-flight receiver this offseason.
Can you blame the Eagles for making Oelhoffen the team’s top priority? I mean, the guy did post both a solo and an assisted tackle last year. That’s right, two total tackles in eight games!
Who is this Oelhoffen guy and how exactly does he help the Eagles? My excitement must be a joke, right? Far from it...
Oelhoffen is a 15-year veteran. His experience makes him the Eagles' No. 1 veteran in terms of experience. The Eagles finally have a No. 1...who needs a Chad Johnson, Larry Fitzgerald, or Mike Williams?
Oelhoffen brings a championship ring to the Eagles from his days as a Pittsburgh Steeler. Realizing his inability to win a championship on his own, McNabb has already been seen wearing Oelhoffen’s ring around the locker room, making Donovan appear to be a champion...priceless!
The 2007 Eagles defense ranked near the bottom of the league in interceptions. Reviewing Oelhoffen’s career stats (zero interceptions) shows that the Eagles will be able to maintain this low distinction.
The recent hamstring injury suffered by rookie DeSean Jackson has left fans wondering who would handle kick return duties. Worry no more Eagle land, Oelhoffen is your man. Oelhoffen sports a career average of 10 yards per kickoff return. What other DT sports such gaudy numbers?
The stimulus check that you received can now be put to good use. Stop reading this article and go out and buy your Oelhoffen jersey!
Posted by chris klinkner at Wednesday, June 18, 2008