The Philadelphia Eagles - Last to First in 2008 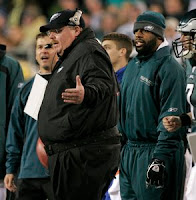 Can the 2008 Philadelphia Eagles be this year’s worst to first team?

In 2007, the last place teams were the Eagles, Bears, Rams, Ravens, Falcons, Raiders, Texans, and Dolphins.

Since 2002, at least one team each year has made the turnaround from basement dwellers to division champs. Since Andy Reid has been head coach, the Eagles have not gone back-to-back seasons without making the playoffs. Both are good signs for a turnaround.

Compared to the other teams that finished in last place in 2007, the Eagles appear to be the logical choice.

I am not saying that the Eagles will be hosting the Lombardi Trophy in February, but a first-place division finish and a return to the playoffs is not out of the question.

The Eagles finished the 2007 season ranked in the league’s top 10 in three key offensive categories. The offense was sixth overall in total yards, 10th in passing yards, and eighth in rushing yards.

The numbers show a pretty dynamic offense. The strong results should continue as Thomas Tapeh is the only offensive starter not retuning.

The one area of constant struggle was red-zone efficiency. The Eagles had no difficulty marching down the field, but once inside the twenty, they stumbled. The Eagles ranked near the bottom of the league in scoring in 2007, finishing seventeenth in points scored.

Red-zone efficiency should be improved with the return to health of Donovan McNabb and L.J. Smith, the addition of Lorenzo Booker, and improved starting field-position from Jackson’s addition to the return unit.

The Eagles' defense also posted impressive numbers during the 2007 season. Like the offense, the defense ranked in the league’s top 10 in three key defensive categories. The defense was ninth in points allowed, 10th in yards against, and seventh in rushing-yards allowed.

The area of weakness for the defense was their inability to create turnovers and create consistent pressure on the opposing quarterback. The Eagles finished the season with a paltry 11 interceptions and a mediocre 37 sacks.

Looking back and looking forward, the case is there for the Eagles to make the jump to the top.
Posted by chris klinkner at Friday, June 27, 2008