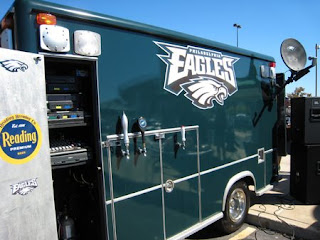 As we begin the final countdown to the start of Football Season and the Phillies continue their race to who knows where, a mini sports controversy of sorts has developed.

No, it’s not which of the teams, the Eagles or Phillies, has the best chances of ending our 100 season championship drought, or even which team has made the most of their trade opportunities. It’s, believe it or not, which team has the best tailgating!

Now, despite the fact that this is a sports blog, usually reserved for serious discussions, by self proclaimed experts, of x’s and o’s and player stats, neither of which I can claim intimate expertise in, I do know more than a little about food and bbq and partying, both indoors and out. I’ve had many serious discussions with my buddies Jack Daniels and Johnny Walker.
I’ve also been an Eagles Season Ticket Holder for the past 7 years. That’s not a lot of time, I guess, in the scheme of things for Eagles Season Ticket Holders, but it is enough, I think, to make some credible observations.

Phillies tailgating vs Eagles tailgating. Come on. That’s like comparing your neighborhood block party to Woodstock (no, not the Peanut’s character).

I’ve tailgated at Citizen Bank Park. Me and a few hundred others, enjoying a picnic on a summer day in our t-shirts and shorts, sitting on lawn chairs, grilling some hot dogs and throwing around a baseball.

I’ve also tailgated at the Linc. Me and several thousand others. Many, despite freezing temperatures and inclement weather, in t-shirts and shorts, thanks to visits from Jack and Johnny and cousin, Bud. Many others, like me, in layers of clothing. We are sitting on Eagles chairs, living room size sofas in front of stadium sized TV’s, and gathered around special Eagles buses and SUV’s, and we are cooking ribs and steaks, and pasta and crabs on almost commercial grade grills.
With all the comforts of home, or at least their neighborhood Tap, some never even go into the stadium. And, the way the Eagles have sometimes played, that’s not necessarily a bad thing…but, I digress into something approaching real sports talk!

To be fair about it, Phillies Fans are getting better. I don’t remember any tailgating at the Vet, and Football has a long tradition of tailgating. So, for a nice Sunday in the Park with a few friends, bring your grill to the Park.
But, for a real tailgating experience, come on out to the Field. With the Eagles playing a home game this Thanksgiving, there is sure to be a real feast that day. Turkey dinners with all the trimmings right from the tailgate.
Posted by ken klinkner at Monday, June 23, 2008

Nice. I might just have an excuse to attend an Eagles game now. Thanks!

no tailgating is complete without a good cigar too!

Hello !.
You may , perhaps very interested to know how one can reach 2000 per day of income .
There is no initial capital needed You may commense earning with as small sum of money as 20-100 dollars.

AimTrust is what you thought of all the time
The company incorporates an offshore structure with advanced asset management technologies in production and delivery of pipes for oil and gas.

Its head office is in Panama with offices around the world.
Do you want to become really rich in short time?
That`s your chance That`s what you wish in the long run!

I`m happy and lucky, I began to get real money with the help of this company,
and I invite you to do the same. It`s all about how to select a proper companion utilizes your savings in a right way - that`s the AimTrust!.
I earn US$2,000 per day, and my first deposit was 1 grand only!
It`s easy to get involved , just click this link http://jyxaninyl.kogaryu.com/arotek.html
and lucky you`re! Let`s take this option together to become rich

Hi!
You may probably be very curious to know how one can make real money on investments.
There is no initial capital needed.
You may begin to get income with a sum that usually goes
on daily food, that's 20-100 dollars.
I have been participating in one company's work for several years,
and I'll be glad to share my secrets at my blog.

Please visit blog and send me private message to get the info.