Philadelphia Phillies and Eagles: A Bunch of Teases 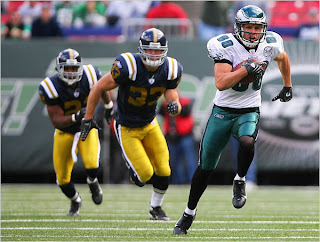 As a Philadelphia fan we are constantly being teased. Rumors are what they are, just rumors.

During the off-season we have heard about the Eagles' interest in Randy Moss, Chad Johnson, Larry Fitzgerald, and Roy Williams. This week we are hearing about the Phillies interest in C.C. Sabathia, A.J. Burnett, and Erik Bedard.

The Eagles will enter training camp with Curtis and Brown battling for the number one WR position. The rumors never materialized. It will be another season without the Lombardi.

As a fan, expect the Phillies to follow suit. Myers will be starting playoff game number two. It will be another season without a World Series championship.

Philadelphia fans teased season after season. Guess Elton Brand is out of the question for the Sixers too...
Posted by chris klinkner at Saturday, June 21, 2008