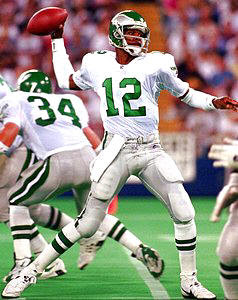 With Curt Schilling’s 2008 season being over (and possibly his career), this Philadelphia fan got to thinking about another Philadelphia great, Randall Cunningham.

Curt Schilling and Randall Cunningham. Two ex-Philadelphia athletes whose career numbers put them on the cusp of the Hall of Fame.

Does either player carry Hall of Fame credentials?

Despite Schilling achieving the majority of his success away from Philly, he will always have a place in the hearts of Phillies fans. His 1993 playoff performance was one of the most dominant in team history.

Cunningham had brief stints in Minnesota, Baltimore, and Dallas, but he made his mark as a Philadelphia Eagle. Say #12 to an Eagles fan and they say Randall Cunningham.

Cunningham is a four time pro bowler and a four time all pro selection. Even more remarkable are Cunningham’s three MVP awards and his ranking as the NFL’s all time leading rusher at the quarterback position.

The case for Cunningham begins to unravel when you look at his team's success. With the Eagles, Cunningham could never carry his Eagles past the second round of the playoffs. As a Viking his team crumbled in the NFC Championship Game against the Falcons.

An argument could be made that Warren Moon also did not achieve great playoff success but was enshrined into Canton.

A closer look at the numbers shows 49,325 passing yards and 291 touchdowns for Moon. Cunningham’s career numbers are 29,979 yards and 207 touchdowns.

Moon ranks fourth all time in passing yards and sixth in touchdown passes. In the same categories, Cunningham ranks 30th and 24th all time. The numbers support Moon being in the Hall of Fame. Unfortunately the numbers do not support a similar fate for Cunningham.

Cunningham revolutionized the quarterback position with his scrambling ability and freak athletic skills. Unfortunately his lack of team success (no Super Bowl appearances) and pure passing numbers will keep him out of Canton.

Unlike Cunningham, Schilling achieved his greatest success in the post season.

With the Phillies he claimed NLCS MVP honors in leading the Phillies to the 1993 World Series. During his time with the Arizona Diamondbacks and Boston Red Sox Schilling claimed three World Series titles.

Without his clutch performances, the Diamondbacks and Red Sox would not have claimed their titles. Schilling posts an 11-2 post-season record, a World Series MVP, and an historic bloody sock performance against the Yankees.

The Hall of Fame argument for Schilling weakens when you look at his numbers and the fact that he was not the dominant pitcher of his era.

Schilling posts 216 wins, 3116 strikeouts, and a 3.46 ERA. These numbers, which earned him 6 all-star selections, were good but not great numbers.

Both Cunningham and Schilling put up strong numbers to support a Hall of Fame selection. Unfortunately it looks like both athletes will come up short in their quest for enshrinement.
Posted by chris klinkner at Sunday, June 22, 2008

I agree. As a Viking fan, I do not believe that Cunningham is a Hall of Famer. As you said, his case disappears when you take into account team success.

You could not be more wrong about #12. Are you serious? Let's start with Minn. That year was absolutely sick for any QB & WR Combo until Moss and Brady last year. It was not 12's fault his kicker decided to miss his first FG of the year in the NFC Championship Game. Not to mention 12 doesn't play defense. So you can't blame him for giving up those points in that game. He and Moss carried that team for real.
Then lets talk about his years as an eagles. Fog bowl, can't blame 12 for dropping the go ahead TD while being wide open in the End Zone. That honor belongs to that overrated stiff Keith Jackson. Oh wait, what about the time our "great" defense turned in a clunker against Jim Everett and the rams? Made them look like the 07 Colts.
Don't get me wrong, 12 share's in the blame and he was a bit of a whack job. But there was a reason for 3 MVP's. Randall was the truth. I'd take him over 5 anyday. Not to mention the bigger whack job of a coach he had. Who gave him no offensive help other than byars. By the time he got the help in Fred B and Calvin W. Our Defense was trash. Reggie was gone, Jerome died, Eric Allen cashed in on FA. B&E was showing signs of wear and tear. Come on man...If you are a true Eagles fan, and watched Randall every week and you're being totally honest with yourself and not blaming him because the media told you to. You truely have to consider him for the HOF. You look at pure talent, the numbers, he's got to be in. First ballet, maybe not. But definitely in.