Terrell Owens: A Big "What If?" 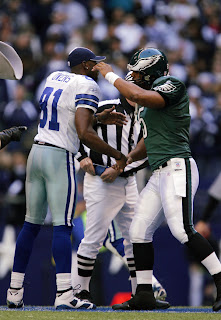 It is another frustrating day to be a Philadelphia Eagles fan. The day’s headlines show that Terrell Owens has reached a contract extension with the Cowboys (reported three years, $27 million). At this point, Eagles fans should be over the TO saga, but today’s news makes one wonder, what if?

What if the Eagles had handled things differently with Owens? The Cowboys rewarded TO’s strong on-the-field performance with a new lucrative contract (despite one year remaining on his previous deal). Owens has been on his best behavior as a member of the Cowboys. These two facts are most definitely related.

What if the Eagles had followed suit and rewarded Owens with a new contract following his Super Bowl performance? Would the Philadelphia championship drought have ended before the 100th season?

The way of the Eagles brass is to not rework a player’s contract regardless of their stature with the team (see current examples of Brian Westbrook and Lito Sheppard). I can see the rationale in the Eagles' philosophy (if a player isn’t happy with a contract, well, then don’t sign it!).

But Owens meant so much and brought so many intangibles to the Eagles.

TO brought a swagger and attitude to the team. TO helped push the Eagles past the NFC Championship game barrier. TO made McNabb better. TO made the entire Eagles offense better. TO brought 14 touchdowns to the Eagles!

Each offseason that has followed has brought continued questions about the state of the Eagles receiving corps. Efforts are made to upgrade the position, but in the end the team is left with mediocrity. Reworking TO’s contract would have brought strength and stability to the position for years.

Again, by 2008, Eagles fans should be past the TO debacle. Unfortunately today’s signing stirs up past anger. And the Eagles appear to have learned nothing from the TO situation, as they are taking a similar stance with Sheppard’s contract.

The Eagles continue to look silly as they continue with their stingy financial decisions. Silly in the past for not rewarding TO, and even sillier years later for suing him for bonus money not repaid to the team (approximately $800,000).

The silliness continues today with Lito Sheppard, and one wouldn’t be surprised if Westbrook’s contract turns into the biggest mess of all.
Posted by chris klinkner at Wednesday, June 18, 2008