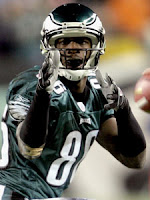 Sporting News released their team rankings of wide receivers in the NFC. Despite the constant outcries to upgrade the position, the Eagles pulled in a number 6 ranking out of 16 teams.

Not surprisingly the Eagles did not land a receiver in the top 5 individual ranking of wide receivers.
Ahead of the Eagles were NFC East rivals Giants and Cowboys. On the flip side, Sporting News has the Eagles cornerbacks ranked as number 1. So the Eagles should be able to negate the strength of their rivals.
Posted by chris klinkner at Friday, June 27, 2008