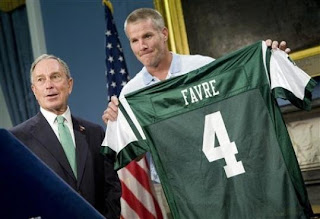 By Justin Harlan- President Favre has left the building. He's not part of the Pack anymore and has been welcomed with open arms onto the Jets, whom have much needed a QB in the past few seasons. Clemens doesn't seem like he'll be their future and is certainly not their present. Chad's arm is about as strong as mine after 2 reconstructive surgeries. So the move was the best move for the Jets.

The deal is confusing, based on percentage of snaps and other clauses, but all said and done, the Packers could get anywhere from a 1st rounder to a 4th rounder, with all likelihood pointing towards a 2nd or 3rd round pick. Good deal to make? Who knows, but the decision was made as soon as Favre retired that Rodgers was their guy, so the decision was right for them.

What is most startling is how much of a Prima Donna Brett Favre obviously is. The Pack could have handled some things better, but the bad guy throughout the whole situation has been Favre from the first day he said he may want to come back. It wasn't about his team or the fans at any point, it was always about Brett. And, what is ridiculous is that as soon as he decided to come back, he thought the world would stop for him. Sadly enough, the media allowed Favre to take over, from his comeback dominating sports channels and network news to actually pre-empting programming on several channels to show his arrival at Packers camp. It was as if Brett thought he was the President and the media did nothing to deflate this overblown bravado.

Favre is still a player, as he demonstrated last year. He still has the "Favre factor" and can make a big play out of nothing at any given time. And, the Jets did the right thing to bring him in and fill a gaping hole under center. However, how much he has left can be debated all day.

Being an Eagles fan, I always come back to the question of how moves elsewhere in the league affect the Birds. This move does little for me, as Brett is now in the AFC. We don't see the Jets during the regular season and, thus, unless we both go to the Bowl we won't see Favre at any point. Best of luck to the Jets, whom we should expect to be vastly improved and able to challenge the fallen Patriots, but hopefully Brett realizes he's not bigger than the game and comes back to Earth real soon.
Posted by chris klinkner at Saturday, August 09, 2008