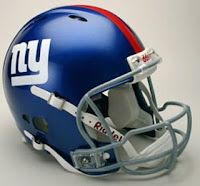 If your football knowledge reaches beyond the Iggles, you know that the Giants are desperate for some help at the DE position. Last season's strength is now a weakness with the retirement of Strahan and the season-ending injury to Umenyiora. No way Tuck gets another 10 sacks being the focus of the opposition.
So come Saturday afternoon the Giants are sure to be scouring the trash heap following final roster costs. Our beloved Eagles could actually be unloading some DE garbage worth recycling.
Back to the team we know. The Eagles appear to have a numbers crunch at the DE position. I see the Eagles keeping 6 DEs on the 53 man roster. The shoe-ins are Cole and Parker. You would also think that Howard and Abiammiri (recovering quickly from his wrist injury) are also guarantees. That leaves Clemons, Smith, and McDougle battling for the two final spots.
Would the Eagles risk cutting Clemons or McDougle and then watch as they get picked up by the NY Giants?
I say Reid has a little trickery up his sleeve come Saturday. Both Clemons and McDougle will make the Eagles team. No way the Eagles are giving up on Clemons after giving him a $4 million signing bonus. No way the Eagles cut McDougle who is their best DE this preseason.
I foresee rookie Bryan Smith suffering a mysterious injury Thursday night against the Jets and being placed on IR for the year. In this scenario the best 6 players are on the roster and a high draft pick is not lost on waivers.
But if my thinking proves wrong, don't be shocked to see McDougle sporting Giants' blue this season.
Posted by chris klinkner at Wednesday, August 27, 2008

good post, i wouldn't doubt that it could happen

Could be worse. Could be T.O. going to the Cowboys. Oh wait that did happen.