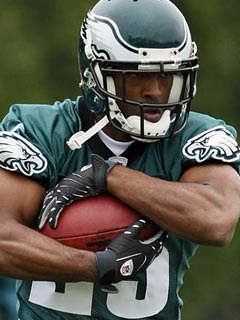 Are we pleased with the Eagles off-season acquistions? Or are we upset? Do we still need more time before giving our final answer? The answer is probably the later of the three, but at this point of camp we should have a decent idea of what we got...

Asante Samuel: Injured for the better part of camp, but his place on the team is a no-brainer. Samuel is the Eagles starting left cornerback. I imagine a lot of teams will be throwing his way with both Brown and Sheppard manning the starting right corner spot.

Kris Wilson: A lot of hype surrounded the Wilson signing. With LJ Smith signing only a one year deal, Wilson was thought to be the athletic tight end that would step into the starting TE spot next year. Whoops! Camp reports have Wilson struggling mightily. The man just can't seem to hang onto the ball. I guess Wilson did not take advantage of having Tony Gonzalez as his mentor while with the Chiefs. Looks like Celek is firmly entrenched as our number two TE, with Smith battling for his roster life with Matt Schobel.

Dan Klecko: Klecko might have failed the FB experiment, but he is turning some heads as an undersized DT. His work ethic makes you see why the man is sporting three super bowl rings. I will not be shocked at all if Klecko manages to win a roster spot as the #4 DT and special teams ace. Hard not to chear for a Temple product.

Luke Lawton: If the season ended today it appears that Lawton would not even make the team. The Eagles are not going to keep two fullbacks on the roster. So far Davis is winning the battle, but I would not be surprised to see Lawton shine on special teams during the preseason and possibly overtake Davis as the starter and lone FB on the roster.

Lorenzo Booker: If camp reports are indeed true, I still can't figure out how Booker did not make a bigger impact with the Dolphins last year. True he was a rookie, but the Dolphins were 1-15! I am anxious to watch Booker in preseason action. Is he truly the real deal or just another Na Brown? If he is for real, what a weapon to pair with Westbrook in the backfield. Another shifty, elusive running back with great hands. And his speed and shiftiness should also greatly improve the kick off return game.

Chris Clemons: His greatest camp highlight was being rushed to the hospital because of dehydration. It could be that Clemons is still working his way fully back from the incident, but his camp has been pretty much unimpressive to date. With the injury to Abiamiri Clemons' importance will be even greater. Behind him are McDougle and rookie Bryan Smith (enough said). Here's hoping that Clemons 2007 season was not a fluke. Prior to 2007 his career high for sacks was 3.

A couple of hits and a couple of misses. The acquisitions are nice, but the health of McNabb will still ultimately determine the Eagles success this year.

Oh yea, in case you missed it, Greg Lewis is the Eagles #2 WR for tomorrow night's preseason opener. I know it's preseason, but Greg Lewis?!? Didn't we get rid of him with Mahe and Detmer. What incriminating pictures of Reid does Lewis have? If anything it makes you appreciate having Brown as our usual # 2...how sad!

agree wilson has been a bust. at the same time who would have thought that booker would be this good. looks we are even.

lawton is a white boy what did ya expect

screw the Eagles man. phillies are the towns best hope right now for a title. eagles are now even behind the Sixers too.

dude now you got me worried about clemons. trent cole needs a little help