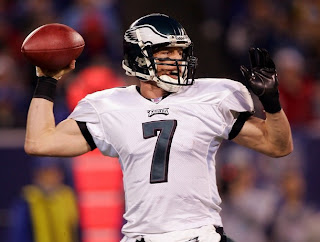 I won't truly believe it until it's 100 percent official, but it sounds as if the Brett Favre saga might FINALLY be coming to an end. I wonder what ESPN is going to do with all their free time? There will no more Favre trackers scrolling across the bottom of the TV, no more Favre special afternoon programs, no more seeing the mug of Wendy Nix 24/7.

Despite my happiness I bet Jeff Garcia is royally pissed about the Favre ending. The reports have Favre landing with the Bucs (deal likely to be finalized on Wednesday). All Garcia does is win games, get his team to the playoffs, and then find himself unappreciated and out of favor with his team the following season. And McNabb thought he had it rough!
So with Favre becoming a Buccaneer, what is the likelihood that Garcia stays with the team? I would say pretty much zip. How much playing time does a back-up to Iron Man Favre get? Why not have the Eagles make a trade for Garcia? I understand that the odds of this happening are also zip, but there is some logic to the idea.
It is true that Garcia could find himself another starting job in the NFL instead of being an back-up in Philly. But would that be the smartest thing for Garcia? During his stint with the Lions Jeff saw what happens when you take a job just to be a starter. You end up miserable, your performance suffers, and your team stinks. Garcia is a winner, performs best when he is playing for a winner, and is happiest when he is winning. All of these points lead directly to the Eagles.
Garcia would come back as the back-up to McNabb. There would be no quarterback controversy. McNabb is our man and has looked AMAZING in camp. If the Eagles are going to be successful in 2008 it will be in large part because of #5. But McNabb does have a history of getting hurt. We have to go all the way back to 2003 for the last time McNabb played a full 16 games.
This is where Garcia comes in. If McNabb suffers another injury do we really want to watch another season go to waste with Kolb (still needs more time) or Feeley leading the offense? We would be wasting the efforts of a dominant defense and risk another season of missing the playoffs. It's not hard to believe that with Garcia on the team last year that the Eagles would not have gotten those extra wins to get into the playoffs. See Feeley's 8 interceptions as the reason why.
Again my idea will most likely die with this post, but it does make some sense. It makes sense as an insurance policy for the Eagles. It makes sense for Garcia as another opportunity to win.
Posted by chris klinkner at Wednesday, August 06, 2008

To be discussed further after McNabb's first injury or bad series of games!

2004 McNabb all over again this year...Curtis is the new TO

knowing the silly eagle fans, if Garcia came back, fans would be screaming for him to start over McNabb

just imagine if stupid scott young didn't screw up on 4th down...wonder how far Garcia could had taken us

at least Garcia's wife is hot, life isn't all bad

dream is gone if brett goes to the jets!