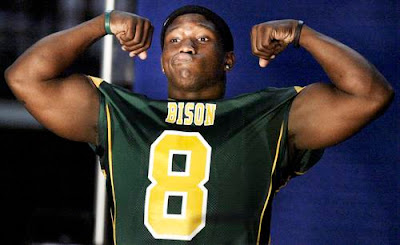 Joe Mays looks like a stud. He’s a rook and is playing against backups, primarily, but… man can the kid hit. He’s always around the ball and he plays downhill with great instincts. With a promising young corps already in place, where does this kid fit?

The starters are set and Akeem “The African Dream” Jordan is the 4th LB, ready to come in and play on either the strong or weak sides. Boiman should make the team as a veteran leader for the ST squad that has started at all three LB positions. That’s 5 LBs, only leaving one more spot… maybe.

Mr. YouTube has undoubtedly been outplayed by Mays. Roland should clear waivers, allowing the Birds to develop him at WILL on the practice squad. So, if the Eagles can keep 6 LBs, Mays should have a job. With his outstanding play, it should be a no-brainer that he makes this team.

In my crystal ball, I see this kid developing into a true run stopper and a solid leader at MIKE. What would that mean to the future LB corps? Mays may be the MIKE in a year or two, moving Stew back to the SAM and Gocong to a pass rush specialist role. Mark my words, unless Gocong can develop his freakish athleticism and become a true LB, he’ll be depth at LB and play a Joker role in this defense. With Stew, a prototype strongside backer, on the roster, and a possible stud MIKE in Mays, don’t be surprised.

Back to reality, Mays NEEDS to make this team. His play has been stellar. I feel bad for Togafau who has played with heart and can be a decent special teamer, but Mays is the real deal… at least as a solid backup LB.
Posted by justincharlesharlan at Tuesday, August 26, 2008

I only worry that maybe another veteran LB is needed

Don't forget about Gaither, he might be the best of the bunch

I love Gaither, he's not moving... that's why he wasn't mentioned.

He is solid, a future pro-bowler.