Reggie Is Back, But Do We Care? 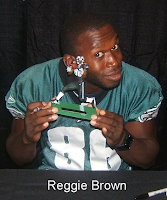 Reggie Brown was back at practice this morning. Though I am not sure how many fans cared that he was hurt (Achilles) and absent from Friday's game.

As a group the wide receivers had a strong showing against the Steelers. Jackson, Lewis, Avant, and Baskett each had at least 2 catches on Friday. Jackson lead the way with 5 catches for 51 yards.
So do the Eagles even need Brown?
Despite the criticism (mostly deserved) that has been directed at Brown during his Eagles career, the Eagles WR group is better with Reggie Brown. Brown may not be a true number 1, but along with Curtis, he is still the best of the bunch.
Avant and Baskett showed some potential last year, but all too often disappear for large chunks of the season. Lewis is a 4th stringer that excels in that role (oddly enough against the Patriots Lewis plays like a Pro Bowler!). Jackson we can't forget is a rookie and our expectations must be tamed at least for year one.
So we are back to Brown as starter opposite Curtis. During last year's 3-1 record to end the season Brown was at his best. In that 4 game span Brown had 22 receptions for 262 yards and a pair of TDs. Again, not spectacular but the best of the Eagles WR bunch. 2007 was also another year where Brown saw his reception total again increase from the previous year.
I am not arguing that Brown is the answer or will be the answer as a top flight, true number 1 receiver. But in the current collection of WRs on the Eagles roster, he is a top talent (not an encouraging statement for the quality of the WRs) and the Eagles are better with him out on the field.
Posted by chris klinkner at Monday, August 11, 2008

The fact that Brown starts just shows what a sorry bunch of WRs the Eagles have. It is a good thing that #5 is so good.

i second that one, Jackson is the best WR on the team. Curtis is good but would be better starting in the slot.

so garbage the Wrs are

and somehow Reid is happy with his WRs. the coach is a f-ing idiot

reid and brown both suck. mcnabb well he is a keeper. it's sad, jackson's performance made me not even think about brown for a sec friday night.

your a jack ass.. you all are.... reggie has been solid...... and would benifit even better if we had s big number 1..... if you were eagles fans you would support these guys..... reggie... is going to have a good year... and to say reggie, curtis, baskett, and lewis suck makes no scense.... maby if all you assholes took a step back from the pot and the booze you could play Wr for the philadelphia eagles in the NFL... you can all suck my dick!

is it too late to get a real receiver in here????