If It Wasn't For Bad Luck He Would Have None 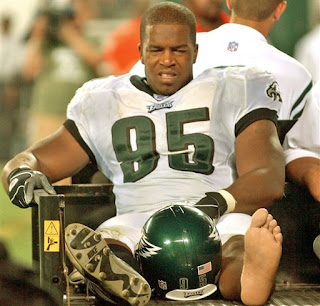 Look who may finally be getting some luck on his side. Look who is trying to shed the label of being the biggest draft bust of the Andy Reid era.

We are of course speaking about Jerome McDougle. You know the first round draft pick who in 2005 was shot and forced to miss the entire season. Then last year McDougle suffered a season ending triceps injury in the preseason. In total the man has 3 sacks in his Eagles career.
Prior to Friday night we had heard the reports that McDougle was having a strong training camp. We heard that McDougle was taking advantage of the increased reps that were the result of the Abiamiri injury. But based on past history the reports were greeted with some doubt. No way McDougle makes the squad. He must of been going up against Winston Justice in camp!
Well Friday night showed us that the camp reports were no joke. Granted McDougle wasn't going against the Steelers first team offense, but the man can only work against what is there. McDougle pressured Steelers rookie QB Dennis Dixon all night long, while also making plays in the running game. Such a performance should no doubt lead to increased and more meaningful snaps as the preseason progresses.
So if McDougle can keep this performance up it just might result in one more year with the Eagles. Oddly enough I have more confidence in McDougle performing this year than Darren Howard, who did zip on Friday night.
Speaking of disappointments...while McDougle might manage to secure a roster spot, the same cannot be said of Ryan Moats. Moats' uninspiring performance on Friday night should all be guarantee his exit. If Moats was smart he would get himself injured again, securing himself yet another seasons worth of paychecks.
Posted by chris klinkner at Monday, August 11, 2008

its still early, give it time and i am sure something bad will happen to Jerome

and we all thought that DE was a position of strength. poor cole is going to see a lot of double teams again this year.