Is Clemons A One Year Wonder? 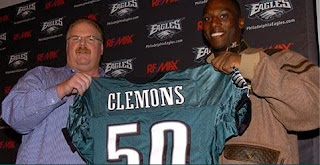 It is still the off-season and it is never fair to all-out bash an injured player, BUT is Chris Clemons in danger of not making the Eagles 53 man roster?

Worse, is Clemons a one year wonder? Was his 8 sacks in 2008 a mirage? Is the real Chris Clemons the man whose previous career high in sacks was 3 and had difficulty staying on an active roster?

I tend to believe that injuries are preventing Clemons from showing his true worth to the Eagles. In his short time with the Eagles Clemons has already been rushed to hospital for dehydration and suffered a calf injury that has sidelined him for the past two preseason games.

But as we get closer to final cuts, will there be enough time for Clemons to showcase his talents? Are the Eagles Eagles willing to admit their error and eat the $4 million signing bonus given to Clemons?

Despite his injuries and inability to grasp the defense, the Abiamiri injury should secure Clemons a spot on the team. This is a sad statement for one of the Eagles top off-season acquisitions.

But on the flip side, McDougle looks like he may FINALLY be about to justify his first round draft selection.

hope ur not right man

Clemons cannot be any worse than Kearse!