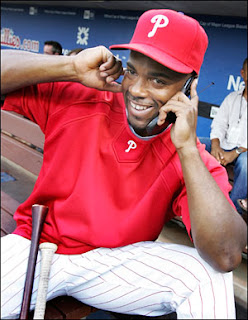 And I quote Jimmy Rollins on the Philadelphia Fans, "There are times," he said. "I might catch some flak for saying this, but, you know, they're front-runners.

Rollins you are an ass. First you don't hustle, then you can't get your lazy butt to the ballpark on time, then you bitch to the national media about the Philly fans. Good, bad, we fans sell-out the ballpark to support the Phillies.
The man wins one MVP award and one freaking division title (first in 14 years), and now he thinks he has the right to insult his fans? It is the old adage, think before you speak man! It might be OK for Rollins to think or discuss privately that the Phillies fans are front-runners, but to actually say it on TV is a slap in the fans' faces.
It is inexcusable for a veteran player on a team that hasn't won a title since 1980 to insult the team's fanbase! Oh the boos that are going to rain down on Rollins on Tuesday night.
Maybe Rollins should look across the street and take a lesson from Donovan McNabb. McNabb gets unfairly criticized every single season by the fans and the media. His every move is under the microscope. Yes McNabb tends to whine a bit about the treatment, but not once has he ever complained or attacked the Philly fan base. McNabb is a class act that knows better. Rollins is a spoiled crybaby who thinks we all owe him something after one good year.
Time to shut your trap J-Roll and perform on the field. You are a mediocre player this year and as of this morning your team is on a free fall from first!
Posted by chris klinkner at Thursday, August 14, 2008