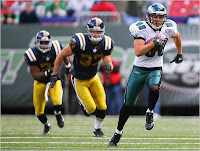 If it weren't for bad luck Philadelphia would have none. I hate the preseason, absolutely hate it! Why...one word...injuries!

The breaking news from Eagles camp is that WR Kevin Curtis is out with a sports hernia. According to Coach Reid, Curtis "will be out for awhile." The injury was suffered during the Panthers game.

Stupid, stupid preseason games. And now a mediocre receiving core will struggle to even be mediocre. Curtis was an absolute stud last year, leading the Eagle WRs in receptions, yards, and touchdowns. Even bigger things were expected in his second year with the team.

So we are now left with Brown (also injured), Baskett, Avant, Lewis, and Jackson. Can Baskett and Avant carry their strong camp play into the regular season or are they just another Na Brown? It looks like Greg Lewis will secure himself another year with the Eagles now. Jackson has handled the NFL transition with ease to date, can he continue his strong play?

Does it matter that Curtis is now out? We have seen McNabb lead the offense before with mediocrity at the WR position. James Thrash, Charles Johnson, and Todd Pinkston never prevented the Eagles from achieving post season success.

Do the Eagles explore a trade or go after the recently dumped Joe Horn. Horn is no longer dominant, but might be considered an upgrade to the current group of WRs on the Eagles roster. Any team interested in a disgruntled cornernack? Hey, Freddie Mitchell is still out there!

Following Curtis' surgery we should have a better idea of a timetable for his return. Based on the history of the injury I would expect at least half the season to be lost for Curtis.

Let's just hope that all is not lost by the time he does return. McNabb and the defense it is time to be stellar. Reid, time to run the ball!
Posted by chris klinkner at Wednesday, August 20, 2008

The Cards are saying he's not available for a trade, but for goodness sakes can't we make them an offer they can’t refuse? Offer Sheppard, a DE (Why not? We have 3 Juqua Parker-type DE's already, might as well get rid of one and do I dare say keep McDougle?), a WR or two and a #1 pick! Why not throw in even more draft picks - THE FUTURE IS NOW!

noone is untouchable. we need a WR!

#5 deserves better than this crap!

andy is an idiot if he doesn't go out an get help. IDIOT!!!!

Horn is not an upgrade, He may not even make this team. Avant, Basket, and G-Lew are all comparable to or better than 2008's version of Horn.