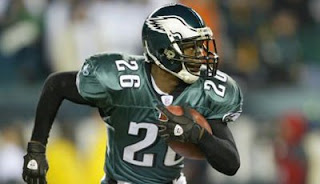 By Justin Harlan - Now that we know the Jets are interested in acquiring Prima Donnas, perhaps we should seek a trade with them for Lito.

Earlier in the Lito debacle, most would have said that he's taken the high road. So much so, in fact, that even after signing Drew Rosenhaus as his new agent, fans like myself assumed he'd keep his mouth shut and put it on the field this year. Being disgruntled about your contract situation could be one hell of a motivator, so hoping for a big year then a demand to be traded could have been a strong possibility (perhaps still is a likely scenario).

Now, tides are turning, the Rosenhaus disease is hitting and the "Lee Toe" camp is no longer silent. Sheppard has apparently "outplayed his contract" and is now complaining that Jeff Lurie took a dig at him Monday. Whether or not YPA means anything, who cares? Stay healthy and maybe you'll get your money. A playmaker is no good sitting on a bench.

Sounds like they can build a mini Dallas Cowboys team. All they need is a few criminals and they will be set!

if anyone wants to take lito i'd trade him

I'm just tired of him. He didn't do much for his case by getting burnt by Hines Ward on Friday.