The Eagles - A Bunch Of Copy Cats 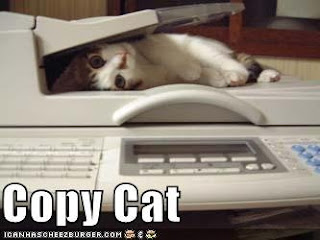 The NFL is a copycat league. A team wins the title and then all off-season teams try and follow that team's blueprint to capture the title next year.

The NY Giants are this year's model. And it appears that the Eagles are playing the role of copycat. But just not in the way you would think.

The Eagles saw the impact that rookies had on the Giants' success. Rookies can step into a starting role or provide valuable depth on the roster. Despite criticism of the Eagles again trading out of the first round, it looks like they might have found a few 2008 contributors.

I would not be surprised to see at least 4 Eagle rookies contribute this year.
- DeSean Jackson: Top punt returner; Wouldn't be surprised to also see him as one of the top 2 WRs on the roster by mid-season
- Trevor Laws: 3rd in the DT rotation, reminds me of another Mike Patterson
- Quintin Demps: A playmaker in the defensive backfield; Maybe the heir to Dawkins?
- Joe Mays: A stand-out on the second unit; The Eagles continue to hit with their LB selections

Great post- absolutely think the Eagles can do it.