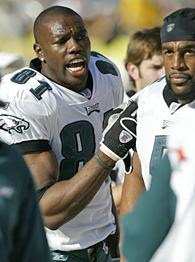 Yes I know you have to live in the present, no point of dwelling on the past. But, man, what could of been. If only the Front Office was a smart as McNabb. McNabb I am in one hundred percent agreement with you and your thoughts on T.O.:

"It could've been great," McNabb said. "What did we have, 30 TDs? You don't see that type of combination very often. That's like Peyton Manning and Marvin Harrison. We would've been up there."
Where in the hell were these comments three years ago when maybe Donovan's support could have helped keep T.O. on the team?!? Instead he said nothing and T.O. is on the hated Cowboys...but enough of me dwelling on the past!
You can never count on what-ifs in life, but come on, doesn't everyone agree that had the Eagles managed to of kept T.O. that the Eagles would have had at least one Super Bowl by now? The blame could go anywhere for the T.O. debacle...Eagles Management, McNabb, Terrell Owens, Drew Rosenhaus, etc...
In the end, the team, McNabb, and us fans are left with season after season of mediocre receivers. But hey, if T.O. had stuck around, what would fans bitch and moan about if we actually had decent receivers! The 610WIP morning show just might have been cancelled!
And since you appear so wise McNabb I hope you are right on the Eagles being at the top of the NFC. If you are right I don't think we would then need to worry about you playing elsewhere next year. "I might end up somewhere else," McNabb said. "And I'm prepared for that."
Hopefully the renegotiation of Westbrook's contract becomes the norm for the Front Office and players that do outperform their contract are rewarded. I see a Pro Bowl year from McNabb in 2008, which hopefully results in a new deal for #5 and plenty more years in Philly. It would be nice to see McNabb and Jackson get a few years together. Or if the pieces fall into place maybe an Anquan Boldin to throw to next year.
Yea McNabb has some shortcomings, can be a bit whiny at times, but stability at the QB position if tough to come by. I'll take McNabb over Kolb any day. And wouldn't it be typical Philly luck that McNabb would go elsewhere and hoist the Lombardi Trophy in our faces!
Posted by chris klinkner at Tuesday, August 12, 2008

damn straight it could of been great!

its a shame TO was such a little bitch and couldn't keep his mouth shut. drew rosenhaus is a rat.

reid would be crucified if mcanbb was not brought back next year.

i doubt it but i hope the eagles truly are a top nfc team. what it is the nfc so anything is possible.