Sheppard Talking With The Money Man 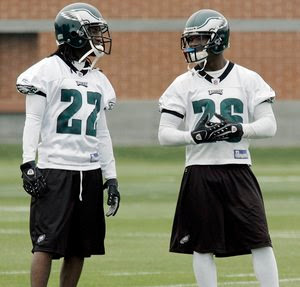 The man can play and the man can speak, who knew! Throughout training camp it was rare to see Asante Samuel on the practice field and even rarer to hear him speak.

Well Samuel has finally had a healthy week of practices and yesterday he had his first press conference since his signing. Save us the " I just love to go out and make plays. That's what I'm all about, making plays, helping my team win.'' Blah, blah, of course you are, what else would we expect you to say. The typical player speak.
What I found most interesting from Samuel's PC is that Samuel and Sheppard are very close and have been actively discussing Sheppard's ongoing contract unhappiness. Smart move Lito. Who needs Drew Rosenhaus when you can get advice from a man who just netted a $57 million deal. "I [Samuel] can give him my pointers and my opinion on the whole situation. We can relate to that, definitely."
It is blatantly obvious that Lito is jealous of Samuel's contract. His crying got the loudest after the Samuel signing. So why not buddy up with your idol and see how to get yourself paid.
One can't forget that just last year Samuel was also battling for a new contract, sitting out of the Patriots' first 3 preseason games, before signing a 1-year franchise tender. Samuel went on to have a strong 2007 season, was not given the franchise tag by the Patriots again, became a free agent, and became a very wealthy man with the Eagles.
So hopefully the advice that Samuel is giving Sheppard is to shut his trap, quit the whining, keep your ass on the field, and produce. If you do these things the money will follow. And to think none of these things involve Rosenhaus the rat either!
Posted by chris klinkner at Wednesday, August 13, 2008

lito is a big baby