If Only The Eagles Had Won 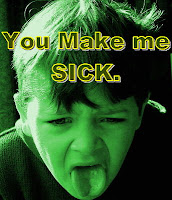 It's early and we all know that Championships aren't won (probably too early to even loose them) in September. But three weeks in I am already sick of hearing and reading article after article about how the Dallas Cowboys are the best team in the NFL, the clear cut Super Bowl favorites. How T.O. is the ultimate team guy now, how America's Team is back.

It was only one game, but man I wish things would have played out differently on Monday Night against the Cowboys. A stronger defensive performance, a more clutch fourth quarter. The Cowboys did not beat the Eagles, the Eagles beat them themselves. A win would have silenced all of this Super Cowboy talk.
But time to put my whining in check. The end of the season and the playoffs are what matters most. I am just not sure I can take 14 more weeks of the national love-fest with the Cowboys.
Posted by chris klinkner at Thursday, September 25, 2008

You're just sore because your boyfriend TO dumped you for a better team...America's Team! :P

A lot can happen in next 14 weeks. Romo can get hurt or McNabb will get stuck on sidelines again. He already stuck with a chest contusion that can linger thru the year if he doesnt get enough protection from OL. All hope seems to be hanging on D again.