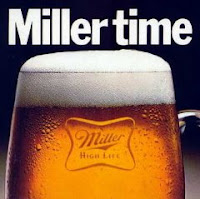 Or whatever else you are drinking...but seriously, Health Miller must be salivating in anticipation of Sunday's game. Look at the numbers for the TEs that have matched up against the Eagles to date:

So I see one of the keys to an Eagles victory as being able to finally shut down the opposition's TE. Whether it is separated or sprained, Ben Roethlisberger is playing with a hurt shoulder. So the Eagles need to take away his safety net. That net is Miller. Make him look to the WRs, which is playing into the strength of the Eagles D.

You say, what about the Steelers running game. Though the Steelers bring a different rushing style attack, I haven't seen anything in the Eagles run defense to cause concern. The Eagles D gave up only 36 rushing yards to the Rams, and only 68 to the girls. In 2 games the opposition has barely cracked the century mark.

So stopping Miller is the key. Can the Eagles do it? Not sure at this point. If they don't we might be looking at a 1-2 start and needing a case of Miller Time to drown our sorrows.

The Eagles have to start solving this TE problem. Next week they see Olsen, then Cooley. What a shame that the Eagles can't match up against L.J. Smith!