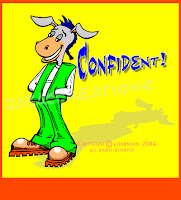 All off-season we heard the cries from #5 and from fans that the Eagles need playmakers. Though we only have a single game to go on, it looks like we have those playmakers.

The obvious playmaker is Asante Samuel. The man got the big contract to fill such a role. Judging on preseason and week 1 performances, the investment looks very wise. Throw his way, incomplete pass. Though it would of been nice to see him get that pick 6 last week.
The other obvious playmaker, which wasn't so obvious is DeSean Jackson. The Eagles got VERY lucky here. My feeling is that Jackson was drafted to solve the PR woes (keep Mahe the hell out of Philly!) and if the man could play WR, will Reid gets his icing on the cake as well. Well the jolly fat man loves his icing. And so does #5:
"My thing, this year, is the fact that I'm trying to give these guys an opportunity to make plays. I thought, earlier in my career, maybe at times I would have held the ball and tried to give [the receivers] an opportunity to create separation when it didn't happen [right away]. But now, it's getting the ball out of my hands and having them make plays for me. We have some great weapons on the outside."
So McNabb is now happy. McNabb now has some trust in his WRs. No longer will you be sitting in front of our TV yelling for McNabb to just throw the damn ball. Now he does and the results are pretty sweet.
8-8 last year without playmakers. You gotta believe no worse than 10-6 with them. Can't wait to see our new toys on Monday night!
Posted by chris klinkner at Friday, September 12, 2008

What happens Monday night when those new "toys" are broken or the batteries run out? 3 words my friend-ST LOUIS RAMS