This Steeler Picks His Nose 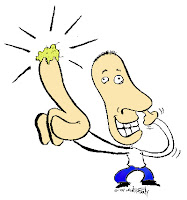 What is he six years old? I heard of a pick six in football...but a dude still picking his nose?!?

Well according to Sporting News, Steelers WR Santonio Holmes still can't seem to break the habit of picking his nose. If that wasn't a bad enough habit, check further down on the link and you see that Homes also has the habit of allowing himself to be photographed naked!
But back to the nose picking...don't think too hard, anyone else have any idea of what we could flick on Holmes if he were to score a touchdown today? Yes, very gross!
E-A-G-L-E-S, Eagles!
Posted by chris klinkner at Sunday, September 21, 2008