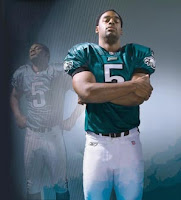 You say this isn't the time to talk about the Eagles. All eyes should be on the Phillies. Philadelphia may never see a team like the Phillies ever again. If I were to go against that opinion, it would be a hard argument for me to win.

But just think, Philadelphia may never see a QB like Donovan McNabb in this town again. With each passing game, McNabb grabs hold of another franchise passing record. His won / loss record is even better. So yea, the Phillies might be the hot item of the month, but don't go shutting the door on the Eagles or #5.

Sure the Eagles could be better than their 3-3 record. Just listen to any Eagle player, and they will tell you such. But as the old adage goes, you are only as good as you record says you are. And if you are pissed with a .500 record, just imagine what that record would be without McNabb under center for each game this year.

For some reason, our attention is focused on the FB position, the up and down antics of a rookie WR, and the never-ending debacles of our TE. What we should be focusing on is the play of the QB. A QB who was performing most weeks without his top playmaker / RB, his top WR from last season, and his top offensive lineman. McNabb's biggest offensive weapon is a 2nd round draft pick most weeks.

Despite his lack of weekly weapons McNabb has still managed to throw for 1576 yards, 8 TDs, and post a QB rating of 93.2. How many teams would kill for these numbers. Probably close to 30 teams.

McNabb's off-the-field performance has also stepped up this season. McNabb has taken steps (calling a player only meeting, acting as a mentor to DeSean) to become a more visible leader in the locker room. McNabb understands that his legacy, his team will take a major hit if the Eagles fail to live up to the "Super" expectations again this year.

Even with the gaudy numbers, McNabb does not escape all blame for some of the head scratchers that have occurred on the field this year. But in the case of McNabb, the good most definitely out weigh the bad. And I bet if you dig deep enough you could probably pin point the majority of the miscues of the man calling the plays or picking the personnel.

Again, nothing wrong with putting the Eagles on the back burner for a while as we enjoy this magical Phillies ride. Just don't go forgetting about the team and QB across the street. There are still 10 weeks of football left to play this season.
Posted by chris klinkner at Thursday, October 23, 2008

Wow, that was really refreshing. I thought I was the only one left who still believes in Donovan. Everyone complains about him but they don't think of the alternatives: Schabb, O'Sullivan, and Pennington, or even Palmer this year. Worse yet, most of them have more playmakers than #5 does. Good to see someone getting his back because it seems like I'm the last guy wearing his jersey at the Linc.

i jumped on the wagon and got a DeSean jersey, but pops is wearing the DMac jersey

Considine jerseys are on sale