Visions of Fred and Calvin 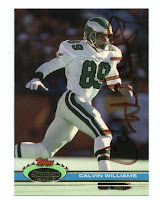 Tomorrow is the game that we finally get to see our true top 2 WRs on the field together. Curtis and Jackson. I expect that it might take Curtis a game or two to find his groove again in the offense, but the site of #80 just back on the field is enough to get this fan excited.

When was the last time that the Eagles actually had 2 above average (hey, I still have to be realistic in my evaluation) WRs starting together? I would say you would have to go back to the days of Fred Barnett and Calvin Williams. Kinda sad that we have to go back to the early 90s to find such a pair (makes you appreciate McNabb even more doesn't it?).

Again, not overly spectacular, but together, numbers that you would appreciate and gladly take from your starting WRs. And when compared to the other receiving duos that wore the green, well may be the numbers are actually quite spectacular.

And is it unrealistic to think that Curtis and Jackson can't have a similar impact together? I think not. Throw in an all-world RB who again is healthy and a top-5 QB, and well our offense should be able to score on anyone.

Now if only we had a Tony Gonzalez type TE to finish the puzzle. Oh well, I guess a 2nd round pick would of been too valuable to give up. Better to use those kind of picks on players like Winston Justice.
Posted by chris klinkner at Saturday, October 25, 2008