Dhani Jones Is Still In the NFL? 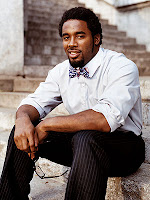 Onwards to the Cincinnati Bengals. Nothing better to solve a teams' woes than a match-up with a 1-8 team. And not that starting on a 1 win team is impressive, but the fact that Dhani Jones is still in the NFL was a shocker to this Eagles fan.

I can't believe after watching his last years with the Eagles there would of been interest in Jones and his air guitar and bow ties?!? But I guess roster decisions like this is what makes the Bengals well the Bengals.
OK, enough of the bashing, as Jones is having himself a pretty decent season with Cincinnati. Through 9 games the man has collected 69 tackles and one interception. Such numbers can only be found in Gocong's dreams!
So it's hello to an old friend this Sunday. And to the Eagles OL, please don't let this guy break out the air guitar this weekend!
Posted by chris klinkner at Wednesday, November 12, 2008