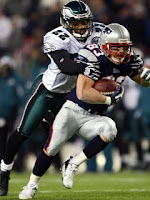 Was Thursday night a possible glimpse into the Eagles secondary future? No Sean Considine and Lito Sheppard was a back-up to a back-up. Another stupid coaching move by the Eagles? Nope...any time Considine is riding the bench the move is brilliant!

All season we have witnessed Quintin Demps excelling on special teams. The kid is a flat out stud at returning and covering kicks. So I guess the next logical step was to see what Demps could do at safety.

On Thursday night the Eagles did just that by inserting Demps into their dime package. The results yielded nothing spectacular, just steady play. But when the alternative is Considine even steady play is remarkable.

The other change in the secondary was Joselio Hanson moving up past Sheppard on the depth chart. Call me shocked when Hanson was announced as a starter on Thursday. Lito is pretty much screwed now in his quest for a new team and new contract. The man can't even supplant a back-up for the starting nod when Samuel goes down. And the fact that Lito's man scored the 2 TDs Thursday means he could be stuck as the 4th stringer.

And good for Hanson. Unlike Sheppard, there is hunger and passion in his play. "He's a real quiet kid, but he's tough, he's quick and he's very detailed at what he does. He's not the biggest guy in the world, but he plays that way," Andy Reid said of Hanson. No argument with those comments here. And such comments should also mean no comments from Rosenthal and Lito...even better!

There are definitely some nice pieces on the Eagles D to build upon for the future. If nothing else comes of this season at least maybe the Eagles can rid themselves of Considine and maybe even Lito.
Posted by chris klinkner at Saturday, November 29, 2008

Demps played a CB not safety position. He doesnt have size to play safety and since camp he was asked to learn CB. Hanson is UFA after this season and playing for his contract. It is most likely he will get a better deal outside thus Demps is going to be his replacement. Reid will draft Dawk's replacement in first two rounds in 09.