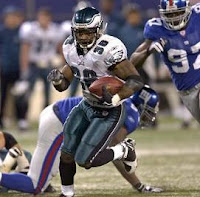 First it was Plaxcio being out for the season. Now there is a report that Westbrook is feeling as good as he has at any point this season. Please let this run of good news continue!

A healthy and effective Westbrook actually gives the Eagles a legit shot at upsetting the G-Men this weekend. As Westbrook goes, well so goes the Eagles offense.

In the Week 10 match-up against the Giants, B-West was struggling with injuries and was limited to 26 yards on 13 carries. The Giants D is good, but a healthy Westbrook would not put up such measly numbers.

Was the Cardinals game a sign of Westbrook finally getting healthy and finally having his play making abilities explode. I hope so. More importantly, I hope that Reid continues to run the ball!
Posted by chris klinkner at Wednesday, December 03, 2008