Let The Door Hit You On The Way Out Lito 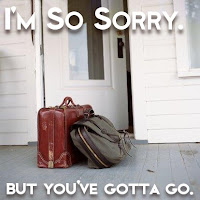 In started in the off-season with Lito bitching and moaning about how unfair his contract was. He yapped to anyone who would listen that he is underpaid and wants to be traded. To make it worse Lito then signed the rat Rosenthal to do his pleading.

Any chance he was given Lito would complain and complain. He would drag teammates into his mess and would even claim that he was being blackballed. All the while his on-the-field play continued to get worse and worse. The highlights were few, the miscues more frequent.

Finally last weekend with Samuel out, it looked like Lito would get the starting nod. Not quite, as he ended up behind Joselio Hanson on the depth chart. Now it looks like the 4th string spot could become permanent with Hanson's strong play against the Cardinals and Lito getting burned for 2 TDs.

And then yesterday Lito was asked whether his contract-trade-playing time situation had affected his play...and he answered YES!

Goodbye Lito and your me-first attitude, I hope the Eagles ship you to Detroit in the off-season! And sadly if the Eagles thought the trade offers for Lito were poor last year, well after Lito's 2008 season they will be lucky to get a 5th or 6th rounder in return now.
Posted by chris klinkner at Thursday, December 04, 2008