It Only Gets Better 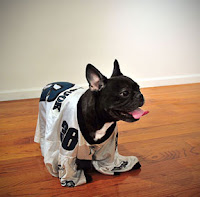 Isn't this ride more enjoyable than the last?

I remember the 2004-'05 team. The team was dominant. The team was so good that no one had to play the final 2 regular season games. The playoffs were a joke...wins over lackluster opponents, the Vikings and the Falcons. Chad Lewis and Fred-Ex were offensive stars. The D never got enough credit for their dominance. The Super Bowl...well, why ruin a good moment here by bringing that up.

I guess what I am saying is that in '04-'05 we all expected the Eagles to win. When you are the best anything less than a Super Bowl berth is a colossal disappointment. So minus the no home playoff games at the Linc this season, this fan is actually enjoying this seasons' playoff run even more.

No one (and I mean NO ONE) expected the Eagles to be playing this weekend. The season was over so many times before...Cincinnati, Baltimore, and Washington, to name just a few. But in the end it was never really over.

Eagles' fans will never forget the performances of Andre Johnson, Michael Bush, and Tony Romo on that Week 17 Sunday. The excitement started at 1pm that day and carried all the way through the clock hitting zero on the Eagles game. The Eagles were actually going to the playoffs. Holy shit!

Next up, the task of having to win 3 road games to secure a playoff trip to Tampa after winning only 3 road games the entire season. Can the Eagles really be the '08 version of the '07 Cowboys? Break out the playoff beards cause Philly is going for the impossible.

Mission 1 was shutting down the NFL's top running back while trying to muster a run game against the leagues' top run defense. No problem, let's give Peterson one highlight reel TD run and then build up the suspense until breaking it open with a screen pass for 71 yards and a TD.

Deep down we all expected the Eagles to beat the Vikings. But having to beat the defending champs on their turf for the 2nd time in a little over a month, not very confident. But is anything really impossible with this Eagles' team. The game is your typical NFC East battle, but of course the last team standing is again the Eagles. Dominant D, a clutch QB, and some damn good coaching equals a trip to Arizona.

Now we wait, a bit over 2 days left. Regardless of the franchises' history we sit confident that a trip to Tampa is our destiny. And why shouldn't we believe? I learned my lesson earlier this season...don't doubt this team.
Posted by chris klinkner at Friday, January 16, 2009

It only gets better if the champ. game result is the same. That veing said I see at least a 10 point win.

Samuel was missing in the first match-up and the Iggles still won. 27 - 17. B-West goes off

As long as the same Eagles team that's been playing the past 4 weeks shows up in Arizona, we're golden.